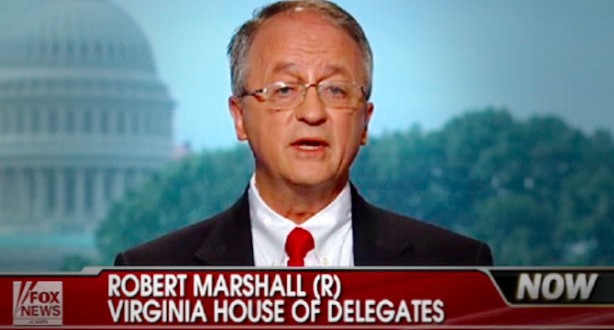 GOP Virginia Del. “Sideshow” Bob Marshall, who failed in his 2014 bid for the US House despite an endorsement from Phyllis Schlafly, is back with more crazy talk. Via Blue Virginia:

Well, now the Virginia General Assembly is gearing up for its 2016 session, and Sideshow Bob is baaaaack….with more crazy, hateful, bigoted legislation. This time, it’s HB77 on “sex or gender discrimination; applicable federal law,” which “[p]rovides that for the purposes of the Virginia Human Rights Act, an ‘unlawful discriminatory practice’ shall not include conduct that violates any federal administrative policy, rule, or regulation adopted on or after January 1, 2012.”

In other words, “Sideshow Bob” wants Virginians to continue being able to discriminate against people based on their gender identity and/or sexual orientation. And yes, this really is what the guy’s focused on, along with his relentless crusade against a woman’s right to choose, his concern that Virginia might need to create its own currency, etc. What a guy, huh?

Blue Virginia notes that among the federal protections enacted after January 2012 are Obama’s executive order on employment discrimination by federal contractors and the EEOC’s ruling than transgender Americans are protected under Title VII. (Tipped by JMG reader Smith)

PREVIOUSLY ON JMG:  In June 2014, Marshall claimed that all charities will lose their tax exempt status following the legalization of same-sex marriage. In February 2014, Marshall filed an amendment that would grant Virginia state legislators the right to claiming standing in marriage lawsuits.  In September 2013, Marshall petitioned the US Supreme Court to overturn Virginia’s legalization of sodomy. In May 2012, Marshall attempted to block the appointment of an openly gay state judge because the nominee has “an illegal husband.” In 2011, Marshall claimed it is a felony for a state office to fly the rainbow flag. Marshall has also called on Virginia to issue its own currency, and has claimed that God punishes women who have abortions by giving them deformed children. After the DADT repeal bill passed, Marshall tried to have gays banned from the Virginia National Guard.