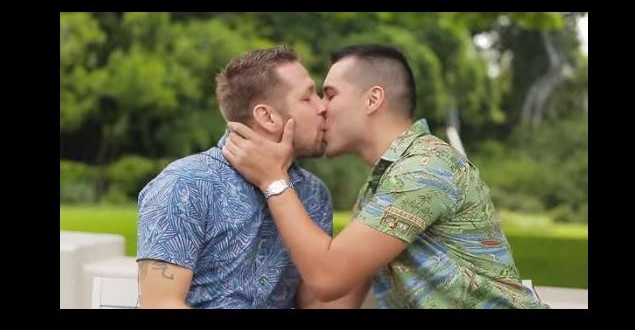 Despite its longtime leadership on issues such as anti-discrimination laws, civil unions and marriage equality, Hawaii has been shy about using that street cred to leverage more same-sex destination wedding tourism. Until now.

The Hawaii Visitors and Convention Bureau — the private, nonprofit marketing organization for the tourism industry — released an emotional video on Monday featuring the surprise wedding of Christian Alarid and Shayne Barnes, an Oahu couple whose family and friends traveled to Honolulu to see the two men tie the knot. The video and teasers for it quickly went viral, with more than 6.5 million total views on social media by Tuesday afternoon.

Now known as the Alarids, the two had gotten engaged last June. They had been planning a 2016 wedding and had agreed to be models in an HVCB wedding photo shoot last August on the Big Island, after which HVCB staffers had a brainstorm. What if the bureau surprised the couple by organizing a picture-perfect surprise ceremony in Honolulu?

Christian serves in the Air Force and Shayne just completed his enlistment with the Marine Corps. Watch below and have the tissues ready.

Previous Mexico Grants Deportation Stay For “Affluenza” Teen
Next Kim Davis On Catholic TV: I’m Just The First Of What Will Be Many To Stop Gay Marriages [VIDEO]