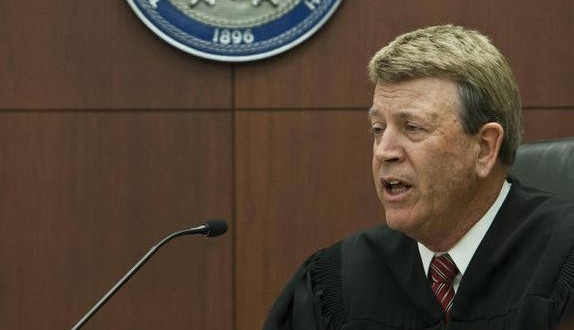 The best gift Nicki Bidlack got for Christmas in 2015 was a piece of paper. It’s an amended birth certificate for her 2-year-old son that lists both Bidlack and the late Sara Clow as the boy’s mothers. “This is what she would have wanted,” said Bidlack, 41, of Ogden, her voice trembling as tears slid across her cheeks. “She wanted him from before he was born. To have her name on it … to have him see her name, even though she’s not here … she would be so happy.” Clow, 29, died from injuries sustained when she rolled her pickup on Interstate 15 near Willard just before midnight on Sept. 13, 2014.

The birth certificate was issued as part of a Dec. 4 order from 2nd District Judge Ernest Jones [PHOTO] that recognized the couple’s eight-year relationship as a common-law marriage — a decision believed to be the first for any gay couple in Utah, attorney Christopher Wharton said. The ruling will allow Bidlack to access critical benefits for the son she’s now raising alone, Wharton added. Because Bidlack and Clow had not married — and legally could not in Utah until two years ago — when Clow died, her estate and death benefits were out of reach, even for the couple’s son, who is biologically Clow’s.

Utah is one of only eight states that recognize common law marriages. (Tipped by JMG reader Paul)