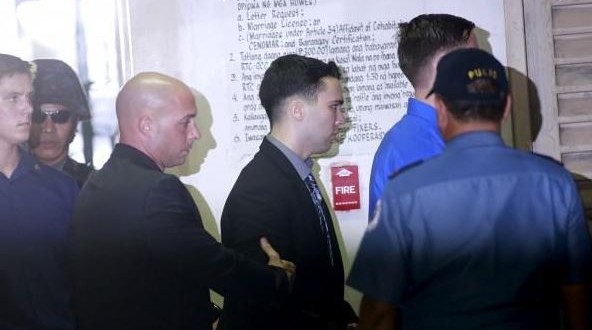 THE PHILIPPINES: US Marine Found Guilty In Murder Of Transgender Woman [VIDEO]

A U.S. Marine was found guilty of killing of a transgender woman who was found strangled in a Philippines hotel room in October last year. The court in Olongapo, a city 77 miles (124 km) northwest of Manila, sentenced Lance Corporal Joseph Scott Pemberton to up to 12 years in prison, according to CNN Philippines’ Ina Andolong, who was at the hearing Tuesday. The naked body of Jeffrey Laude, also known as Jennifer, was found with her head in a toilet in an Olongapo hotel room shortly after midnight on October 12, 2014, police said. Witnesses told police that Pemberton was with Laude at a local disco before the two checked into a hotel on the night of October 11, according to documents seen by CNN. Pemberton told police in October that he’d choked Laude, but then tried to revive her. He said he had become angry with Laude upon discovering she had male genitalia, according to police.

The victim’s family expressed dismay at the length of the sentence. Pemberton is 19 years old.

Previous Sen. Orrin Hatch: The Wall Of Separation Between Church And State Must Come Down
Next Membership