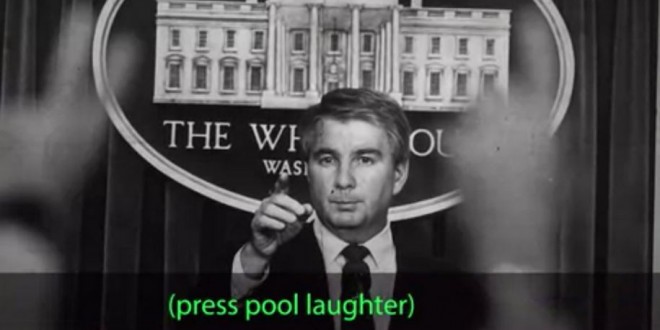 SHORT FILM: When AIDS Was Funny

WATCH THIS. Vanity Fair has posted a short film titled When AIDS Was Funny. The film compiles audio tapes of the homophobic mocking and belittling of gay people and people with AIDS that took place between Ronald Reagan spokesman Larry Speakes and the White House press pool. They write:

Using never-before-heard audio tapes from three separate press conferences, in 1982, 1983, and 1984, When AIDS Was Funny illustrates how the reporter Lester Kinsolving, a conservative (and not at all gay-friendly) fixture in the White House press corps, was consistently scoffed at when he posed urgent questions about the AIDS epidemic. With snickering, homophobic jokes and a disturbing air of uninterest, Speakes dismisses Kinsolving’s concerns about the escalating problem. “Lester was known as somewhat of a kook and a crank (many people still feel the same way),” says Calonico. “But, at the time, he was just a journalist asking questions only to be mocked by both the White House and his peers.”

Previous President Obama Issues World AIDS Day Video
Next Court Filing: Colorado Killer Believed He Could Do “Anything He Pleased” Because Jesus Forgives All