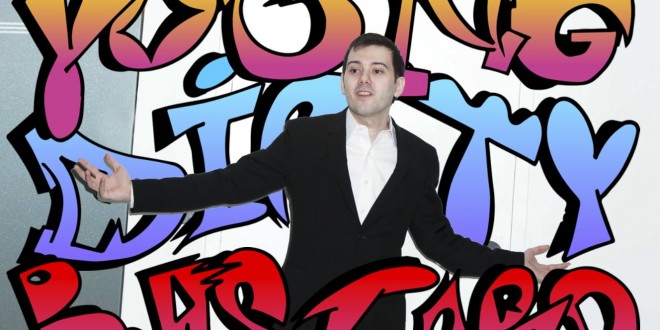 He really loves being America’s most notorious douchebag. Pitchfork reports:

Last month, reports emerged that Wu-Tang Clan’s one-of-a-kind album, Once Upon a Time in Shaolin, had been sold for “millions.” Now, Bloomberg has revealed the buyer’s identity: Turing Pharmaceuticals CEO Martin Shkreli. Shkreli is the former hedge fund manager (and Collect Records associate) who made headlines this year for increasing the price of Daraprim—a drug used to treat AIDS and cancer patients—from $13.50 to $750. He reportedly paid $2 million for the album.

In a statement emailed to Bloomberg Businessweek, RZA wrote, “The sale of Once Upon a Time in Shaolin was agreed upon in May, well before Martin Skhreli’s [sic] business practices came to light. We decided to give a significant portion of the proceeds to charity.” Shkreli says he’s yet to hear the record: “I could be convinced to listen to it earlier if Taylor Swift wants to hear it or something like that. But for now, I think I’m going to kind of save it for a rainy day.”

It was one of the greatest sales pitches the music industry has ever heard. In March 2014, Robert Diggs, better known as RZA, the producer and de facto leader of the Wu-Tang Clan, the iconic rap group, announced that the Clan would create only one copy of its next album, Once Upon a Time in Shaolin, and sell it to the highest bidder. “We’re about to put out a piece of art like nobody else has done in the history of music,” RZA told Forbes. “We’re making a single-sale collector’s item. This is like someone having the scepter of an Egyptian king.”

Initially, the Clan wanted to forbid the buyer from publicly releasing the album for 88 years, but over time decided to grant the buyer total freedom as long as the album wasn’t sold commercially. That meant the owner could listen to the record in a soundproof room, drive a pickup truck over it, or release it for free on the Internet. If the owner desired, he could be the only one who ever heard it. In an era where people are happy to stream music rather than actually possess it, Once Upon a Time in Shaolin offered a chance to own something truly unique.