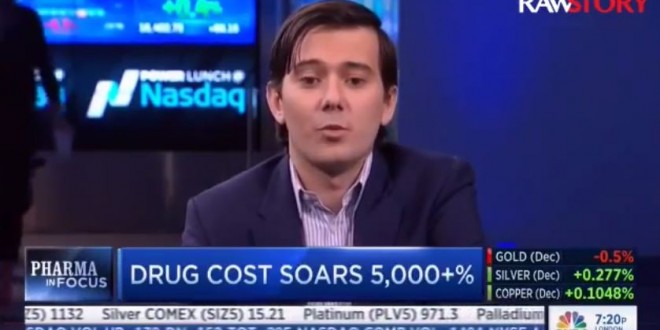 Pharma douchebro Martin Shkreli has told Forbes that he regrets not having raised the cost of his AIDS drug even more than he did. From the interview:

Martin Shkreli hasn’t changed. If anything, the provocative pharmaceutical CEO — who became “the most hated man in America” earlier this year — thinks he didn’t go far enough when he hiked the price of Daraprim by more than 5,000% overnight. “I would have raised prices higher,” Shkreli vowed on Thursday, after being asked how he would re-do the past three months. “That’s my duty.” Shkreli spoke at the Forbes Healthcare Summit during a 25-minute interview that was at turns fascinating, horrifying, and utterly compelling.

Shkreli says the furor about the price increase hasn’t hurt his company “one little bit.” That statement seems rather contrary to the latest earnings statement from Turing Pharmaceutical, which reported a $17M loss in the most recent quarter. An inexpensive version of Turing’s drug is now being sold by one of his competitors.

Previous NORTHERN IRELAND: Belfast Court To Issue Ruling On Same-Sex Marriage Lawsuit “After Christmas”
Next Ted Cruz: Obama Is More Interested In Promoting Homosexuality In The Military Than Defeating ISIS