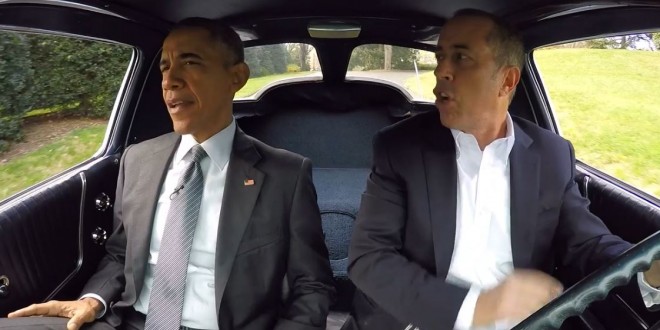 Obama Talks About Nothing With Jerry Seinfeld

Comedian-in-Chief Barack Obama on Wednesday fired off quips alongside Jerry Seinfeld to open season 7 of “Comedians in Cars Getting Coffee.” “I always wanted to be in a show about nothing and here I am,” Obama says. “There’s nothing more nothing than this,” Seinfeld responds. “Nothing.”

The online series features Seinfeld driving around various cities with other comedians. This time, however, the president joined Seinfeld for a trip across the South Lawn in a blue 1963 Corvette Stingray Split Window Coupe before heading to the White House for coffee.

“And I think this cool blue is just the right color for my are-you-kidding-me-super-special guest today: the commander in chief of the United States of America, President Barack Obama, who, in my opinion, has gotten off just enough funny lines to qualify for getting on this show,” Seinfeld says.

You can watch the full show here. The president is quite relaxed and gets off more than a few good jokes. (Tipped by JMG reader Arthur)