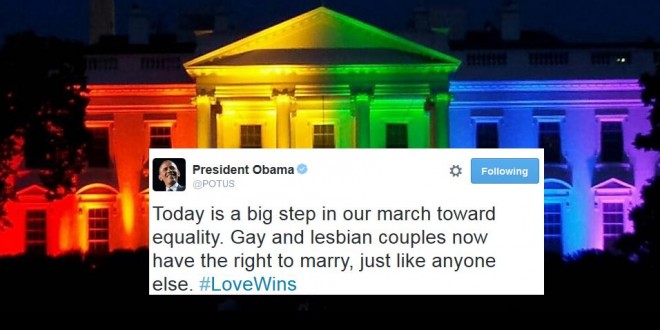 Twitter today released the list of the most retweeted political messages of 2015. At #1 is President Obama’s celebratory tweet on the day that the Supreme Court ruled on same-sex marriage. Politico reports:

The president’s official account (@POTUS), which was launched in May of this year, also snagged the number 2, 3, 7, 16, 22 and 24 spots. The tweets were categorized and ranked based on number of retweets. @BarackObama — the twitter account for Obama’s Organizing for Action nonprofit — got the fourth tweet of the year with a message in honor of the SCOTUS decision to legalize gay marriage. Edward Snowden’s inaugural tweet “Can you hear me now?” rounded out the top 5 list. Hillary Clinton dwarfed the other candidates in terms of 2016 presidential candidates’ retweets. The tweet where the former secretary of state announced she was running for president garnered 101,000 retweets.