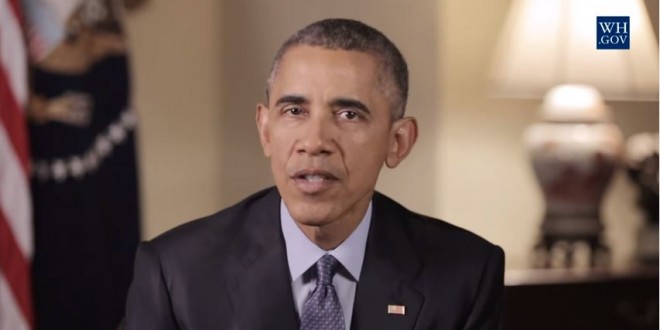 President Barack Obama pledged Saturday that Americans “will not be terrorized” by the threat of mass shootings, but described U.S. gun laws as “insane.” In his weekly address, he said the victims of the San Bernardino massacre should be honored by ongoing efforts to defend America. “That’s how we can send a message to all those who would try to hurt us,” he said. “We will uphold our values—a free and open society. We are strong. And we are resilient. And we will not be terrorized.”

He said Wednesday’s deaths were “an absolute tragedy … not just for San Bernardino, but for our country.” The use of military-style assault weapons was “another tragic reminder that here in America it’s way too easy for dangerous people to get their hands on a gun,” Obama said. “Right now, people on the No-Fly list can walk into a store and buy a gun. That is insane. If you’re too dangerous to board a plane, you’re too dangerous, by definition, to buy a gun.”