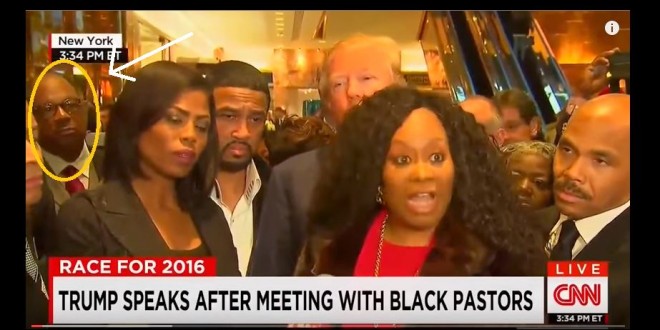 Harlem hate Pastor James David Manning, who says that “Jesus would stone homos,” was among the black pastors who met with Donald Trump yesterday in New York City. Reuters reports:

Among the meeting’s attendees was James Manning, a Harlem-based pastor who came under fire in June for using the billboard outside his church to post anti-gay messages, including one addressed to gay rights supporters that said: “Cursed be thou with cancer, HIV, syphilis, stroke and madness.” Manning once likened Obama, America’s first black president, to Adolf Hitler and has frequently said the president is secretly gay. After Monday’s meeting, Manning pledged his support for Trump. “Mr. Trump realizes why black people are going to vote for him,” Manning said. “He is truthful – forget about him not being politically correct. He loves America, I believe that he does.”

And here we thought Ted Cruz had locked up the “death to gays” vote.

RELATED: A few days ago I posted video from last week’s protest outside Manning’s church. Manning has now issued his own clip of his “knockout victory over sodomite protesters.” Featured prominently in the clip are the many times that Manning screamed “FAGGOTS! FAGGOTS!” at the protesters. In one relatively amusing moment, Manning shouts, “Where are REST of all the faggots?” A protester gets in Manning’s face to respond, “They’re in your HOUSE!” Watch below.