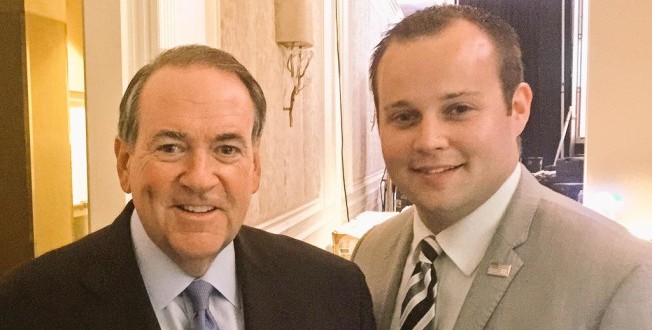 It’s too bad PolitiFact has already named Donald Trump its Liar Of The Year, because THIS one is a whopper. Via Buzzfeed:

Republican presidential candidate and former Arkansas Gov. Mike Huckabee said last week that he never supported or defended Josh Duggar after allegations surfaced in May that the former reality TV star had molested his sisters as a teenager.

“I really didn’t support Josh,” Huckabee told Iowa radio host Simon Conway on Dec. 23. “I supported his parents, if you’ll go back and look at what I said. There’s no support for what he did.”

Huckabee has long enjoyed the political support of the Duggar family and said as recently as June that he would be open to having them join his presidential campaign. On May 22, he wrote a Facebook post condemning Josh Duggar’s actions, but saying he did not think they were “unforgivable.”

“Josh’s actions when he was an underage teen are as he described them himself, ‘inexcusable,’ but that doesn’t mean ‘unforgivable.’ He and his family dealt with it and were honest and open about it with the victims and the authorities. No purpose whatsoever is served by those who are now trying to discredit Josh or his family by sensationalizing the story. Good people make mistakes and do regrettable and even disgusting things.”

“The reason that the law protects disclosure of many actions on the part of a minor is that the society has traditionally understood something that today’s blood-thirsty media does not understand—that being a minor means that one’s judgement is not mature. No one needs to defend Josh’s actions as a teenager, but the fact that he confessed his sins to those he harmed, sought help, and has gone forward to live a responsible and circumspect life as an adult is testament to his family’s authenticity and humility.”

Previous Brian Brown: We’re Not Going To Make It
Next Rafael Cruz: The US Constitution And Declaration Of Independence Were Pretty Much Written By Jesus