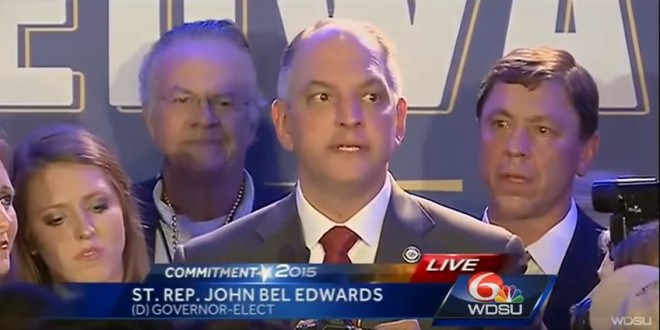 Well, this is a welcome surprise coming from someone who campaigned on opposing same-sex marriage. NOLA.com reports:

Gov.-elect John Bel Edwards plans to issue an executive order to protect the gay, lesbian, bisexual and transgender community from firing, discrimination and harassment as state employees and government contractors. Edwards’ directive would cover state workers and government contractors in agencies and departments he oversees. But executive orders don’t necessarily bind parts of state government outside the governor’s control, such as the judiciary. The Edwards’ transition team did not provide a timeline for when the order might be issued, but the Democrat will be sworn into office Jan. 11.

Outgoing Gov. Bobby Jindal had refused to issue such an executive order although his Democratic predecessors had done so.  Only New Orleans and Shreveport provide LGBT employment protections for the general public. Lafayette and Jefferson parishes protect their local government LGBT employees. (Tipped by JMG reader Ed)

RELATED: Including Louisiana, 28 states offer no employment discrimination protections to LGBT residents, although many city and county municipalities in those states do so.

Previous CNN: There’s A “Controversy” Over PrEP [VIDEO]
Next Tony Perkins On Fox: Don’t Blame The Right For Colorado, Blame The SPLC For FRC Shooting [VIDEO]