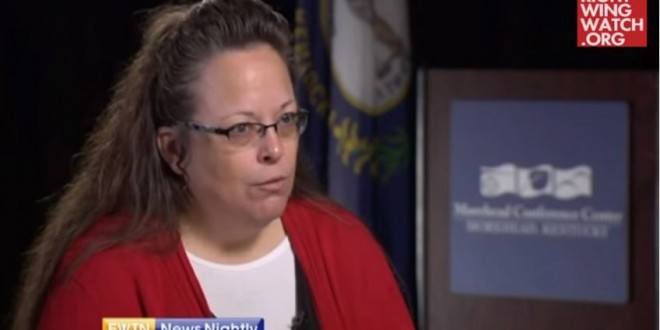 Kim Davis On Catholic TV: I’m Just The First Of What Will Be Many To Stop Gay Marriages [VIDEO]

Kim Davis has appeared on the Catholic cable network EWTN to promise that she is just the first of many local officials that will now refuse to abide by the US Supreme Court’s ruling on same-sex marriages. Right Wing Watch has the quote and the video:

“The stand I took affects every church, every person that lives and loves God, that holds the word of God precious and dear and intimate in their lives,” Davis told EWTN’s Catherine Szeltner in an interview broadcast on December 17. “I’m just the first of what’s going to be very many. You can rest assured of that. And it’s not if it happens, it’ll be when it happens. And maybe my stand will encourage others who will be in the same position.” Szeltner reported that Davis told her that her time in jail was a “joyful and peaceful time” and that she “knows that it is a possibility” she’ll return.