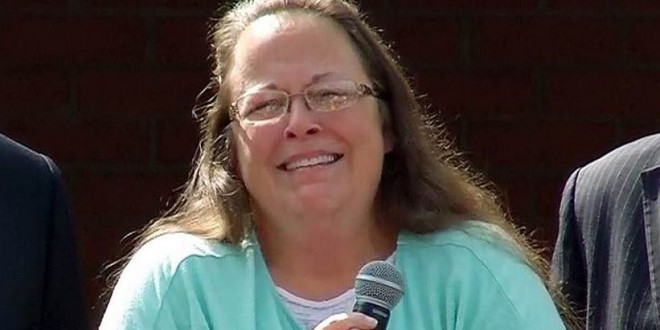 “How ironic that God would use a person like me, who failed so miserably at marriage in the world, to defend it now. The Lord picks the unlikely source to convey the message.” – Kim Davis, speaking yesterday to the Associated Press.

“It makes me uncomfortable to hear people using God … to justify their bigotry,” said 39-year-old David Moore, who with now-husband David Ermold sued Davis in federal court. “I don’t see how that makes her a victim or a hero. She really just had a job to do, and she just needs to do her job.”

Davis’ days in the spotlight are not over, either. Next month, the Kentucky legislature is expected to update the state’s marriage laws and will consider a provision exempting county clerks from having to issue them. Davis said Kentucky’s marriage laws have been “completely eviscerated” by the Supreme Court’s ruling and said she would be willing to come to the state Capitol to testify about any changes.

Davis will be up for reelection in 2017.