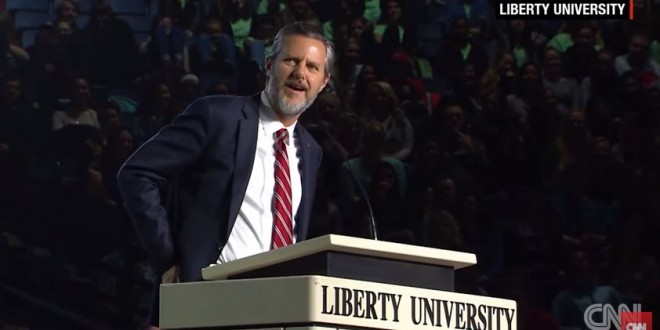 Jerry Falwell Jr. To Liberty University Students: Arm Yourselves So That We Can “End Those Muslims”

To loud applause, Rev. Jerry Falwell Jr. yesterday told students at Liberty University to arm themselves so that they can “end those Muslims.” Via the Washington Post:

“It just blows my mind that the president of the United States [says] that the answer to circumstances like that is more gun control,” he said to applause. “If some of those people in that community center had what I have in my back pocket right now…,” he said while being interrupted by louder cheers and clapping. “Is it illegal to pull it out? I don’t know,” he said, chuckling.

“I’ve always thought that if more good people had concealed-carry permits, then we could end those Muslims before they walked in,” he says, the rest of his sentence drowned out by loud applause while he said, “and killed them.”

“I just wanted to take this opportunity to encourage all of you to get your permit. We offer a free course,” he said. “Let’s teach them a lesson if they ever show up here.”

Falwell later told the press that he’s been carry a gun since the San Bernardino attacks.

“My administration is committed to making Virginia an open and welcoming Commonwealth, while also ensuring the safety of all of our citizens. Mr. Falwell’s rash and repugnant comments detract from both of those crucial goals. Those of us in leadership positions, whether in government or education, must take care to remember the tremendous harm that can result from reckless words.”