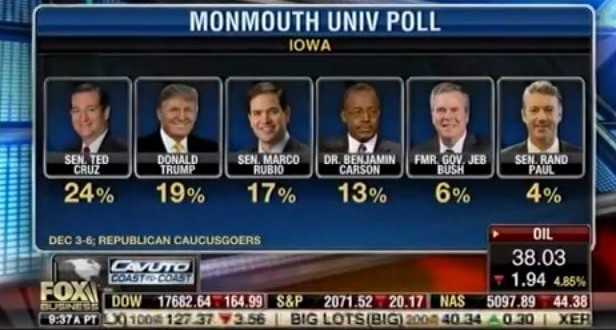 Ted Cruz has overtaken Donald Trump in Iowa, according to a Monmouth University survey of Iowa Republicans released Monday. If the caucuses were held today, Cruz would win with 24% support to Trump’s 19% backing. Marco Rubio comes in a close third with 17% and Ben Carson, who was beating Trump 32%-18% in the last Monmouth University poll, has fallen to 13% support. Behind the Cruz surge is support among evangelicals — a decisive voting bloc in Iowa — who selected Cruz over Trump 30%-18%.

“This marks the first time Ted Cruz has held a lead in any of the crucial early states. As Ben Carson’s stock has fallen, Cruz has been able to corral most of those voters,” Murray said in a statement Monday. “Congressman King’s endorsement may not be the primary reason for this swing, but it certainly put a stamp on the Cruz surge in Iowa.”