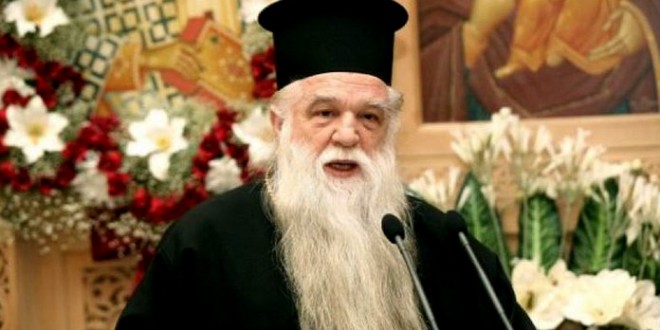 GREECE: Orthodox Bishop Calls On Greeks To Spit On Lawmakers Who Vote For Civil Unions Bill

The Greek Parliament, at long last, is due to consider a civil unions bill. And that has a bishop with the Greek Orthodox Church ready to literally spit with rage. Via the Greek Reporter:

The Holy Synod decided to adhere to its previous position, namely that the Church of Greece denounces alternative family forms because they are a devaluation of the holy concept of the Christian family. It is also a devaluation of human life, turning the holy institution of marriage to a simple civil transaction, according to the Church of Greece.

Controversial Kalavryta Bishop Ambrosios took it a step further verbally attacking homosexuals and members of parliament who have stated that they will vote in favor of the bill. Using very offensive language against lawmakers, Ambrosios calls on Greek people to, “Spit on them! Deprecate them! Vote against them! They are not human! They are freaks of nature! Mentally and spiritually sick! They are mentally insane! Don’t hesitate, then! Wherever you see them, spit on them! Don’t leave them in peace! They are dangerous!” Ambrosios wrote in his blog.

Charming, huh? The bill is due to be heard on December 22nd.  (Tipped by JMG reader Luis)