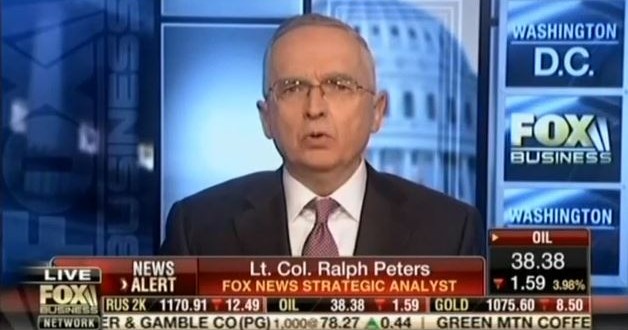 Fox Analyst: Obama Is “Such A Total Pussy” [VIDEO]

Fox News analyst Ralph Peters this morning reacted to President Obama’s speech on terrorism with this: “Mr. President we’re not afraid, we’re angry, we’re pissed off, we’re furious! We want you to react, we want you to do something! You’re afraid! This guy is such a total pussy, it’s stunning.”

Host Stuart Varney then chided Peters, saying, “I can tell you’re super angry and I asked you what your reaction was, but you can’t use language like that on the program, I’m sorry.”

You might recall that during the Wikileaks scandal in 2010, Peters called for the assassination of Julian Assange during an appearance on Fox News. Peters largely makes his living cranking out pulp novels about, what else, war and terrorism.