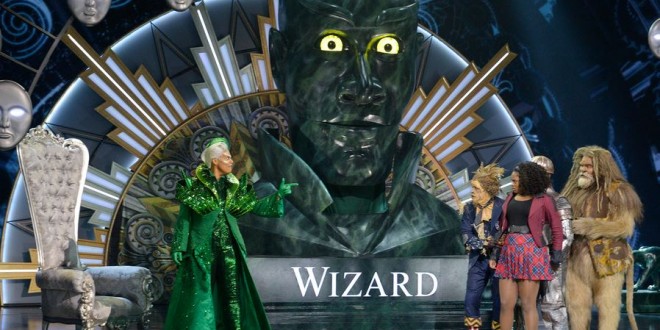 NBC really ramped up the gay for The Wiz Live last night, serving Emerald City realness complete with voguing Munchkins who chant “Slay! Fierce!” and characters who accuse each other of throwing shade. The A. V. Club raves:

And that’s how you put on a show! The Wiz Live! may be NBC’s third attempt at staging a live musical, but it’s the first one that worked without any caveats necessary. I was kinder to The Sound Of Music Live! and Peter Pan Live! than most critics because I felt there was a lot of potential in the idea of staging live musical theater. Tonight NBC proved my faith was well placed with a musical event that was finally worth watching and not just hate-watching.

It would be difficult to overemphasize how much script-doctor Harvey Fierstein has improved upon William F. Brown’s original script, particularly when it comes to the musical’s plucky heroine. Fierstein has created a tight thematic through-line for Dorothy that, frankly, all future productions of both The Wiz and The Wizard Of Oz should steal. There’s always been something odd about the tale of a young girl who dreams of adventure, goes on one, and ultimately decides the best way to live life is to never, ever leave home again. Here Fierstein gives Dorothy a tragic backstory that makes “home” an active choice and not a narrative cop-out.

Also quote enjoyable last night was watching NBC’s Twitter feed as it had clearly been given over to a wildly enthusiastic queen who was prone to saying, “YAAS! WERK!” every couple of minutes.