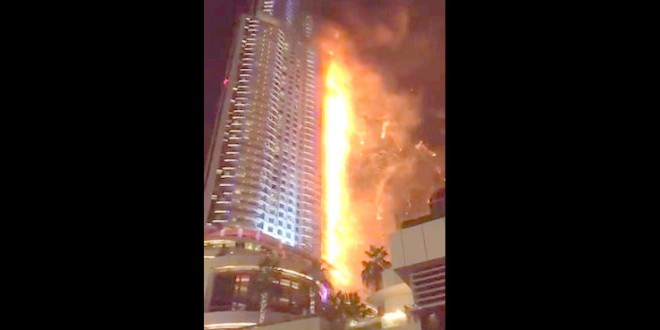 Fire broke out Thursday in a residential building near Dubai’s massive New Year’s Eve fireworks display. It was not immediately clear what caused the fire, which ran up at least 20 stories of the building near the Burj Khalifa, the world’s tallest skyscraper at 828 meters (905 yards). Burning debris rained down from the building as firetrucks raced to the scene. It was not immediately clear if anyone was wounded in the blaze. Dubai planned to wow spectators with three separate firework displays. The show was to begin at the Burj Khalifa, which organizers said was fitted with 400,000 LED lights. They said 1.6 tons of fireworks would be used in the display.

At this writing the fire is not under control and appears to be spreading.