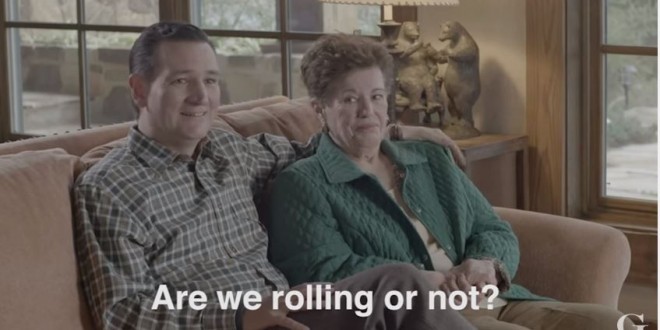 Gawker has compiled a slew of outtakes from hours of footage that one day, probably, will become a Cruz campaign commercial. They write:

Thanks to the (few) rules governing campaign Super PACs, candidates aren’t technically allowed to coordinate with them. Which means candidates can’t technically feed them hours and hours of raw video footage for future campaign ads. Candidates can however, casually leave them on a neglected YouTube account for Super PACs to find. And thank god they can, because Ted Cruz did. The footage is, as CNN noted, deeply painful to watch. Long periods of coaching and silence are followed by clearly scripted word of praise for dear Ted. Hugs are repeated. We’ve compiled the best worst bits of raw Cruz we could find. We’re sorry.

Previous PHILADELPHIA: Pope Visit Screws City For $8 Million
Next Jerry Falwell Jr. To Liberty University Students: Arm Yourselves So That We Can “End Those Muslims”