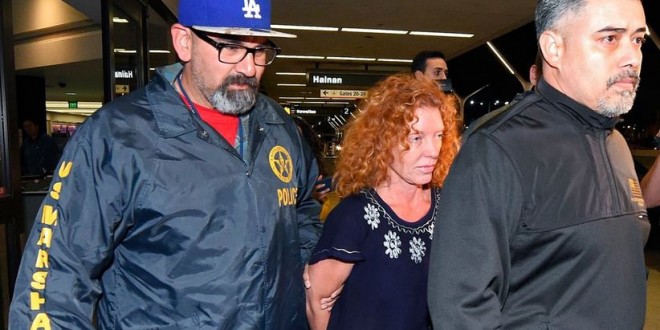 Affluenza Mom Now In US Custody

The mother of “affluenza” teen Ethan Couch is now in US custody. Her son remains in Mexico, where he is fighting extradition. Via Mashable:

Tonya Couch arrived at Los Angeles International Airport on a flight from Mexico in the custody of the U.S. Marshals Service and was taken in handcuffs through the terminal to an unmarked Dodge Charger early Thursday morning. She was wearing blue street clothes and looked away from cameras as she walked, flanked by two marshals.

It was unclear why she was brought to Los Angeles instead of Texas, where she and her son live and where he was on probation for the 2013 drunken-driving crash. U.S. Marshals Service spokesman Eugene Hwang said he could not reveal any details about her trip through California or say how long she might remain here, citing security concerns in transporting someone in custody.

The mother, whom Twitter thinks now looks like the comedian Carrot Top, faces up to ten years in prison. Like her son, the mother dyed her hair to avoid recognition.