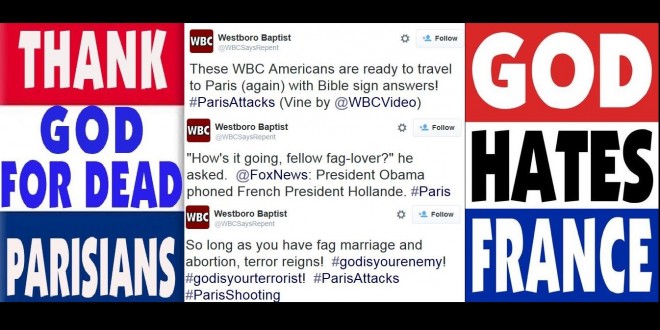 Right on cue, Westboro Baptist Church is blaming the Paris attacks on “fag marriage” and they are offering to take that message to France. Even if France were to allow them to enter the country, which is highly unlikely, they would surely be arrested under hate speech laws. In 2008 members of Westboro eluded their banning from Canada by FedEx-ing their well-known placards in advance and driving over the Manitoba border. The following year Westboro was banned from entering Britain over their plans to picket a production of The Laramie Project, the highly-regarded play about the murder of Matthew Shepard.

Previous FRANCE: Five Killed In High-Speed Train Derailment
Next Ted Cruz On Fox News: Obama “Does Not Wish To Defend This Country” From Terrorists [VIDEO]