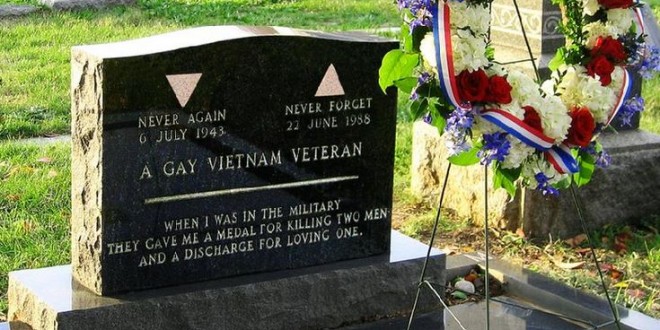 Sen. Brian Schatz, Rep. Charles Rangel, and Sen. Kirsten Gillibrand have written a Veteran’s Day column for USA Today in which they the promote the bill (introduced earlier this year) that would correct the records of gay veterans expelled for their homosexuality. They write:

Congress’s repeal of “Don’t Ask, Don’t Tell” was a watershed moment that ended institutionalized discrimination unjustly targeting gay, lesbian and bisexual service members. Yet thousands of service members who were discharged because of their sexual orientation still bear the scars of that discrimination. We have introduced a bill called the “Restore Honor to Service Members Act” that would finally correct the record and properly honor our gay, lesbian and bisexual service members.

Since the Second World War, more than 100,000 service members are estimated to have been discharged from the military because of their sexual orientation, many with less-than-honorable discharges that have barred them from the benefits that they earned. Without a bill to protect these veterans, thousands of Americans who risked their lives to serve this country will continue to be denied access to the GI Bill and veterans’ health care, and they will have a more difficult time finding civilian employment.

Even those whose discharges were deemed “honorable” still face a high risk of discrimination. Many times, the reason for their discharge may indicate their sexual orientation, threatening their privacy when they share their paperwork with employers and landlords who may use that information to deny them a job or housing, either overtly or under a false pretense.