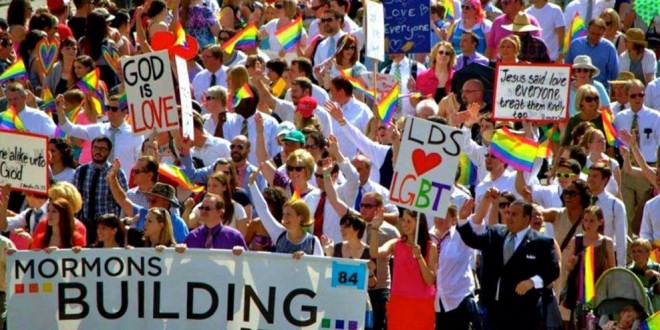 Several hundred people with roots in the Mormon faith gathered in Salt Lake City on Saturday to renounce the church’s new policies targeting gays and their children in an event that marked the latest illustration of the fervor the rule changes have caused. Billed as a mass resignation by Mormons, people filled out paperwork and dropped off the resignation letters at a church building. The large majority had stopped attending church years ago. But they said the new policy that bans baptisms for children of gay parents until the kids turn 18 and disavow same-sex relationships spurred them to come and formally cut ties and have their names removed from the faith’s membership rolls.

“We’re supposed to love our children like God loves us,” said Teresa Schofield, a former Mormon who stopped attending more than a decade ago. “To ask someone to turn their back on their own child or for a child to turn their back on a parent, that’s unnecessary.” The rally came one day after The Church of Jesus Christ of Latter-day Saints stood behind the policies issued on Nov. 5, while providing more explanation and clarifications. Officials said the rules are intended to prevent children from being caught in a tug-of-war between teachings at home and church. They clarified that the rules apply only to children living primarily with a same-sex couple. They also said that while the children of gay parents won’t be given the full spectrum of ordinances, they aren’t barred from attending worship services.

More from the Salt Lake Tribune:

At one of several tables, attorney Mark Naugle helped Mormons expedite their paperwork to resign their memberships in The Church of Jesus Christ of Latter-day Saints. Their forms were then dropped into a file box, which was rapidly filling 90 minutes after the event began, for mailing to nearby LDS Church headquarters to have those members’ names removed from the faith’s rolls. “We’ve talked to at least 800 people,” Naugle said. “It’s absolutely more than I expected.” At its peak, the line to drop off resignation papers snaked through the park along State Street, turned east along 2nd Avenue, then curved slightly north along Canyon Road. Organizers were overwhelmed by the turnout. Lauren McNamara created the event’s Facebook page, which is where many attendees found out about the rally. She initially expected a crowd of about 700 and was “amazed” by the larger-than-expected count. “The energy has been really positive and supportive,” McNamara said. “We may have even reached 2,000.”