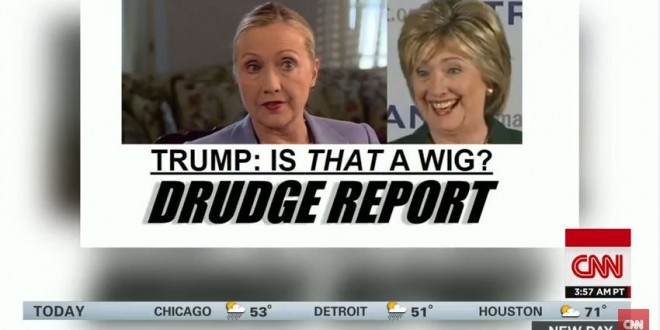 Donald Trump said Wednesday he was shocked to see Hillary Clinton’s latest hairdo, calling it “massive” in an interview on conservative talk radio. Asked by host Mark Levin what Clinton’s appeal to voters is, Trump simply said: “Well, she has a new hairdo, did you notice that today?” The quip prompted Levin to suggest Clinton is wearing a wig. “I tell you what it really was shocking to see it because you’re right it must be, it was massive. Her hair became massive,” said Trump, whose own hair has been the subject of scrutiny.

Warned that his comments might get him in trouble, Trump brushed off the potential for sparking controversy. In a series of tweets Thursday, conservative blogger Matt Drudge also accused Clinton of wearing a wig, prompting People Magazine to give Clinton’s hair dresser a buzz. “She has the most amazing hair in the world,” the hairdresser, Santa Nikkels, told the magazine, calling the wig claims “ridiculous.”

At this writing the story is the top headline on the Drudge Report.