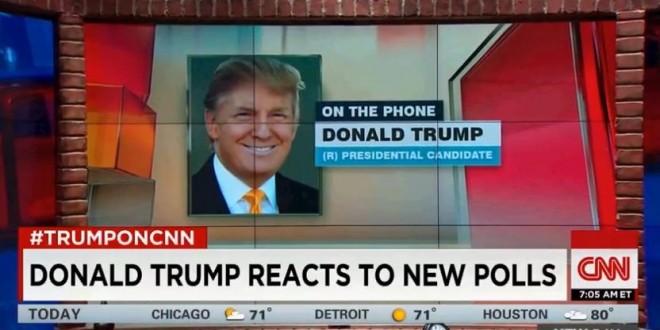 Trump Melts Down On CNN [VIDEO]

Donald Trump had one of his patented meltdowns on CNN this morning, raging at host Chris Cuomo because the network failed to show the “yuuuge lines stretching to Park Avenue” at yesterday’s book signing at Trump Tower. Trump and Cuomo sparred for more than 20 minutes about polls and how everybody is being so terribly unfair to Donald Trump. By the end of the segment the two were practically shouting at each other. The Hill recaps some of the interview:

“Sara Murray didn’t report it very well because she never flips the camera to show the lines. I think she’s absolutely terrible, your reporter,” Trump told host Chris Cuomo. “Either she’s a very unemotional person or she’s not a very good reporter,” Trump continued, adding later, “Maybe she’s a low-key individual and doesn’t believe in showing the crowds.” Cuomo pushed back, forcing the real estate magnate to call him “a top-notch” host. The pair sparred later in the phone interview over CNN’s coverage of Trump’s event. “Excuse me, it stretched all the way down to Madison Avenue from the door!” Trump interjected, referring to the crowd. He returned to suggesting the CNN reporter who covered his book signing reported inaccurately. “I don’t know if that’s because she is incompetent, or she doesn’t like me or maybe she’s given instructions from up above. Who knows. I don’t really care,” Trump said. “Oh please. Listen, you know she’s not getting instructions,” Cuomo said. “I’m sure, CNN is very straight, I’m sure,” Trump said.

Previous Breitbart Headline Of The Day
Next TOLEDO: God To Destroy City As Election Is Again Stolen From Prophetess Opal Covey