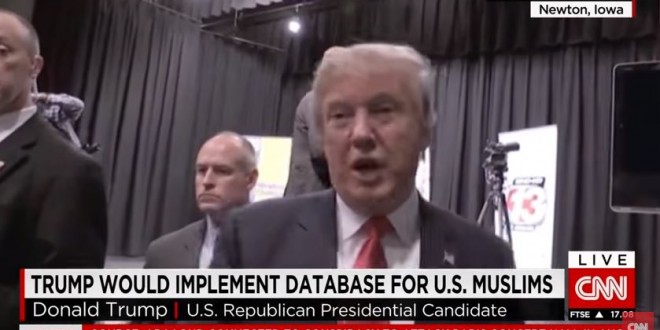 In an interview with Yahoo News published yesterday, Donald Trump said that as president he’d consider forcing Muslim-Americans to carry special ID cards and would have the federal government spy on them. Later yesterday Trump doubled-down on the plan. NBC News reports:

Donald Trump “would certainly implement” a database system tracking Muslims in the United States, the Republican front-runner told NBC News on Thursday night. “I would certainly implement that. Absolutely,” Trump said in Newton, Iowa, in between campaign town halls. “There should be a lot of systems, beyond databases,” he added. “We should have a lot of systems.” When asked whether Muslims would be legally obligated to sign into the database, Trump responded, “They have to be — they have to be.” On Friday morning, Trump rival Jeb Bush called the comments “just wrong.” “You talk about internment, you talk about closing mosques, you talk about registering people. That’s just wrong. I don’t care about campaigns,” he said on CNBC. “It’s not a question of toughness. It’s to manipulate people’s angst and their fears. That’s not strength, that’s weakness.”

Four times Trump was asked how his plan differs from the Nazis. “You tell me,” he said each time. Jewish and Muslim groups have denounced Trump’s statements.