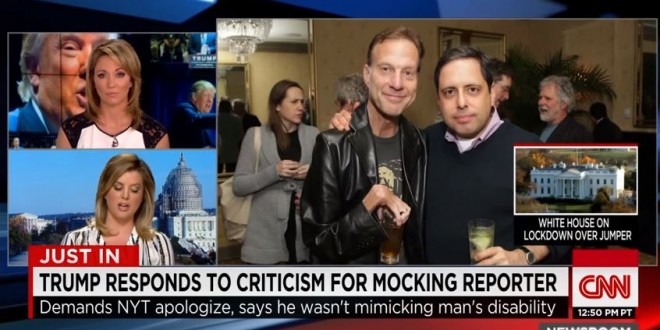 A day after he was widely rebuked for mocking a reporter with a physical disability, business mogul and reality TV star Donald Trump on Thursday denied that he had done so and accused the reporter of “using his disability to grandstand.” Trump also demanded an apology from the New York Times, the reporter’s employer, which earlier in the week issued a statement condemning Trump for ridiculing “the appearance of one of our reporters.” The incident occurred Tuesday at a rally in South Carolina, as Trump was defending his recent claim that he had witnessed thousands of Muslims cheering in New Jersey on Sept. 11, 2001, as the World Trade Center towers collapsed. On stage, Trump berated Times investigative reporter Serge Kovaleski for his recent recollection of an article he wrote a few days after the attacks, which Trump has been citing to defend his claim. Trump appeared to mock Kovaleski’s physical condition; the reporter has arthrogryposis, which visibly limits flexibility in his arms.

If you click through to the YouTube comments, you’ll see unbelievably foul and racist messages from Trump supporters.