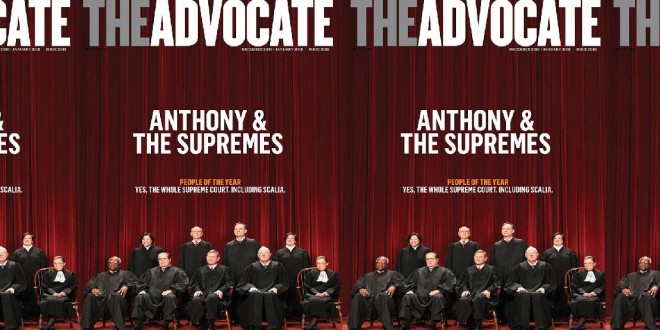 The Advocate Names SCOTUS Its “People Of The Year”

The Advocate today named the justices of the Supreme Court their “People Of The Year” for 2015. The tagline on the cover notes, “Yes, the whole Supreme Court. Including Scalia.”  Mark Joseph Stern writes in the cover story’s opening:

At 10:02 a.m. Eastern on June 26, 2015, the U.S. Supreme Court changed America forever. In handing down its decision in Obergefell v. Hodges — declaring marriage to be a constitutionally protected right for same-sex couples — the court immediately made the lives of millions better. That doesn’t happen often: Most progress in a obstreperous country like the United States happens incrementally. But with Obergefell, the Supreme Court wiped out dozens of discriminatory measures, scrubbing away decades of antigay prejudice. Suddenly, anti-LGBT states had no excuse to degrade same-sex couples, no legal rationale to deny them marriage licenses. The worldwide push for marriage equality was given an inestimable boost, as marriage equality rights advocates in countries like Australia looked to the Supreme Court for inspiration. And here in America, in an instant, gays and lesbians made an enormous step toward becoming equal citizens under the law.

And as for Scalia:

Of course, Justice Antonin Scalia has long been an unexpected MVP for marriage equality advocates, and he continued that role in Obergefell. For decades, Scalia has prophesied with dread that each of the court’s gay rights decisions would lead to some future catastrophe. In Romer, Scalia suggested the court may soon strike down sodomy bans. When the court proved him right seven years later, Scalia noted that its reasoning “leaves on pretty shaky grounds state laws limiting marriage to opposite-sex couples.” Exactly 10 years later, the court invalidated the federal Defense of Marriage Act in United States v. Windsor — and Scalia threw a hissy fit, actually rewriting the opinion to demonstrate how it would soon be used to strike down state-level marriage bans. Two years later, in Obergefell, the court proved him right.

RELATED: Two years ago The Advocate was the target of widespread criticism for naming Pope Francis its Person Of The Year.