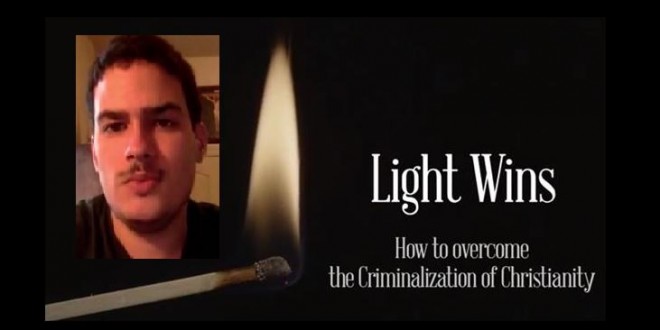 As those of you who follow me on Twitter might know, for weeks I’ve been needling Peter LaBarbera over his appearance in hate group leader Janet Porter’s anti-gay “documentary” alongside genocide advocate Ted Shoebat, who regularly calls for the executions of homosexuals, atheists, and Christians who support LGBT rights.

Responding to me, Labarbera has shrugged off Shoebat’s inclusion in the film, saying that neither he nor Porter knew of Shoebat’s “radicalization” before the film was released. But to his credit (and my surprise), LaBarbera has apparently told Shoebat that he must recant his murderous calls or be removed from the film.

I have been fighting the sodomite agenda for years. I have written many articles on this evil that is trying to conquer us. They put me in a documentary exposing the agenda. One guy who was in the documentary, Peter LaBarbera, got some angry leftists after him because he is in a documentary with me. And what does he do? Instead of laughing it off and using it as publicity, he freaks out and is now pushing for me to recant my beliefs or be removed from the documentary. This is the absolute soulless crap that I hate about this superficial modern society. I absolutely hate it and would love to see its destruction.

People are being butchered by the tens of thousands in Mexico by the occult cartels. I am currently working on a documentary exposing the occult cartels. This guy that I met told me that he was in the border patrol. I asked him if he could be on the documentary. He said he would only if I would cover his face. I agreed. What happens next? His wife freaks out, he acquiesces and doesn’t do the interview. People are being butchered and you care about what your indifferent wife thinks? Is this how we function?

I tell you now, such people are not Christians. “But the cowardly, unbelieving, abominable, murderers, sexually immoral, sorcerers, idolaters, and all liars shall have their part in the lake which burns with fire and brimstone, which is the second death.” (Revelation 21:8). I truly hate this way of acting, and in all honesty, I hate such people.

The bulk of Shoebat’s piece, which I will not link, claims that all gay men are inherently violent rapists and therefore we must all be murdered. Also appearing with Shoebat in Porter’s film are David Barton, Sen. Rand Paul, Rep. Steve King, Rep. Tim Huelskamp, Rep. Louis Gohmert, Mike Huckabee, and other well-known anti-gay activists.

Previous At The Beard & Mustache Championship [VIDEO]
Next “Drop The T” Petition Author: I’m No Homocon