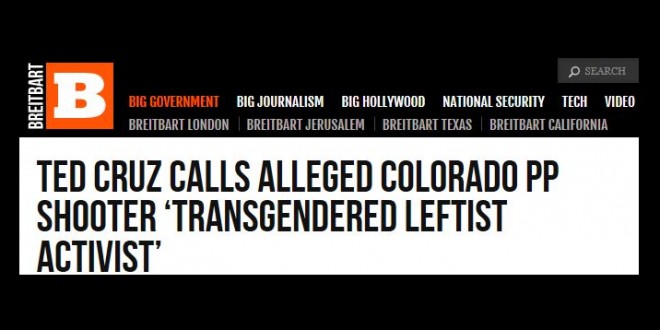 Responding to a reporter’s questions about the Colorado shooting, Ted Cruz yesterday parroted Teabagistan’s latest insane claim that the killer is transgender. All because a voter registration typo has an “F” next to his name. Via Huffington Post:

When a reporter reminded the Texas senator that the suspect allegedly made a comment about “baby parts” while being arrested, Cruz countered, “It’s also been reported that he was registered as an independent and a woman and transgendered leftist activist, if that’s what he is.” Dear’s voter registration, where he is listed as a woman, was uncovered by the Gateway Pundit, a self-described “right-of-center news website.” “We know that he was a man who was registered to vote as a woman,” Cruz said. “The media promptly wants to blame him on the pro-life moment when at this point there is very little evidence to suggest that.”

The Gateway Pundit is Jim Hoft, also known as “the dumbest man on the internet” due to his many ridiculous claims. Shortly after Colorado the attack began, Hoft reported that the killer’s name was Sam Hyde, which is a long-running hoax meme promulgated by members of 4Chan. Hoft later erased those claims and replaced them with the name of actual killer, but his URL reveals the original claim.

Previous JAPAN: 51% Back Same-Sex Marriage In New Poll
Next Donald Trump Cancels Press Conference With Black Pastors Who Aren’t Endorsing Him After All