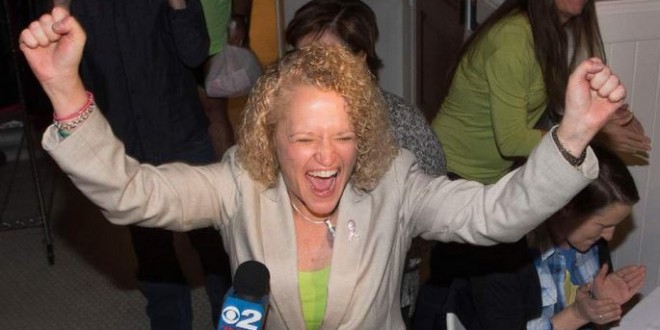 Salt Lake City voters elected Jackie Biskupski as Utah’s first openly gay mayor and only the second female top executive in the capital city, according to the unofficial election-night count. Those vote tallies had Biskupski with 52.19 percent to two-term Mayor Ralph Becker’s 47.81 percent — less than a 5 percentage-point spread. No additional results will be released until the Nov. 17 canvass. “It’s about all these people in this room. Look at the people in this room,” Biskupski said of the crowd of about 200 people gathered at Kimi’s Chop House restaurant in Sugar House. “This is a diverse group of people from all over the city. This is about having a voice again.” Utah Sen. Jim Dabakis, D-Salt Lake City, also an openly gay politician, said the election was history in the making. “Generations of LGBT people could’ve only dreamed of this,” he said. “Jackie is now an iconic gay leader. This is a great moment for Salt Lake City — we’re not the stereotype people across the country think we are.”