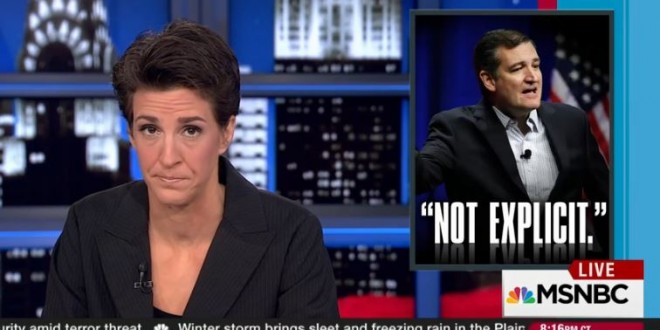 Rachel Maddow: Ted Cruz Needs To Respond To Questions About That “Death To Gays” Event [VIDEO]

WATCH THIS. Last night Rachel Maddow again delivered an excellent report on Pastor Kevin “Death To Gays” Swanson and the appearances of three GOP presidential candidates on the same stage from which Swanson called for the genocide of millions of gay Americans. The Cruz campaign sent Maddow a two-word response to her inquiry – “not explicit” – meaning that they claim Swanson didn’t literally call for executions of gays, when of course the video shows that he did. While mainstream outlets have given scant, passing mentions of the “death to gays” event, Rachel Maddow remains the sole network reporter who has stayed on this story.