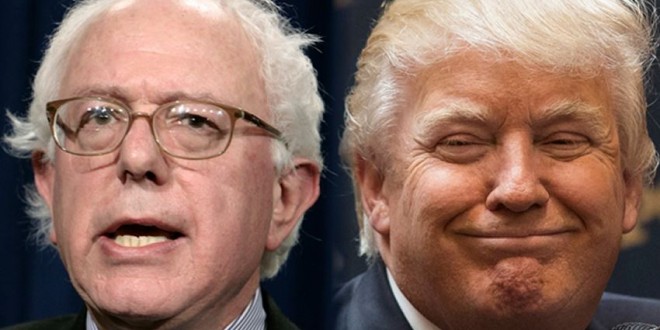 The Hill is shocked:

In a new McClatchy-Marist poll, Democratic presidential candidate Sen. Bernie Sanders (I-Vt.) leads Republican candidate Donald Trump by a landslide margin of 12 percentage points, 53 to 41. In the McClatchy poll, Sanders also leads former Florida Gov. Jeb Bush (R) by a landslide margin of 10 points, 51 to 41. It is shocking that the data suggests that Sanders has a lead over Trump that could be so huge that he would win a landslide victory in the presidential campaign, with margins that would almost certainly lead Democrats to regain control of the Senate and could help Democrats regain control of the House of Representative — if, of course, the three polls that show Sanders beating Trump by 9 to 12 points reflect final voting in the presidential election.

Previous Seth Bogart – Eating Makeup [VIDEO]
Next Christian Site: President Obama’s Cover For Out Magazine Proves That He Is A Homosexual