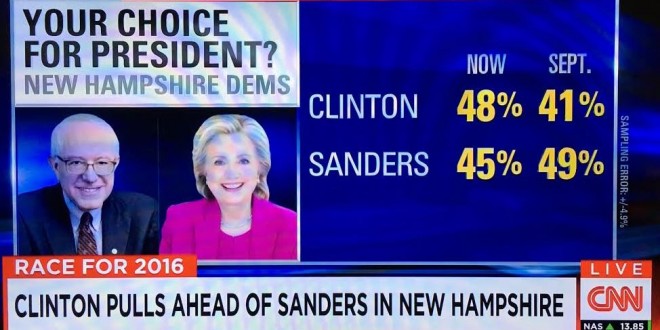 Hillary Clinton has regained the lead over Bernie Sanders in New Hampshire, site of next year’s first Democratic primary, according to a new poll released Tuesday. Clinton leads Sanders 48% to 45%, according to the Monmouth University Poll. Sanders, a Vermont senator, held a 7-point lead in the same poll in September when Vice President Biden, Lincoln Chafee and Jim Webb were included. Biden has since announced he would not run, while Webb and Chafee ended their bids.

Clinton’s gains follow last month’s string of positive developments for the former secretary of State’s campaign, including her widely praised debate performance and Biden’s decision. Sanders, who hails from New Hampshire’s neighboring state, “retains his sizable advantage among registered independents and new voters, men, and younger voters,” according to release from Monmouth about the results. “However, Clinton has made significant gains in the past two months with registered Democrats, women, and older voters.”

Previous TRAILER: Anomalisa
Next Louis Gohmert At Liberty University: Put Eight Gays On An Island And See If Nature Favors Them [VIDEO]