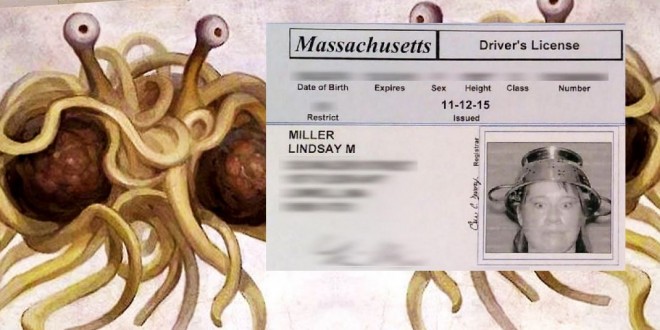 A Massachusetts woman has won the right to wear her Holy Headgear in her driver’s license photo. The Boston Globe reports:

Lindsay Miller claims the spaghetti strainer is a sign of her devotion to the “Church of the Flying Spaghetti Monster.” Miller was originally denied by the Massachusetts Registry of Motor Vehicles the right to wear the colander, her lawyer said. According to the RMV’s website, drivers are not allowed to wear hats or head covers in their photos, unless they are worn “for medical or religious reasons.” Miller fought the RMV’s decision, and enlisted the help Patty DeJuneas, a member of the Secular Legal Society, which is the network of lawyers that assist the the American Humanist Association. “The First Amendment applies to every person and every religion, so I was dismayed to hear that Lindsay had been ridiculed for simply seeking the same freedoms and protections afforded to people who belong to more traditional or theistic religions,” DeJuneas said in a statement.

Pastafarians have won similar battles in New York, Utah, and Texas – which was the first such case in 2013. (Tipped by JMG reader Stephen)