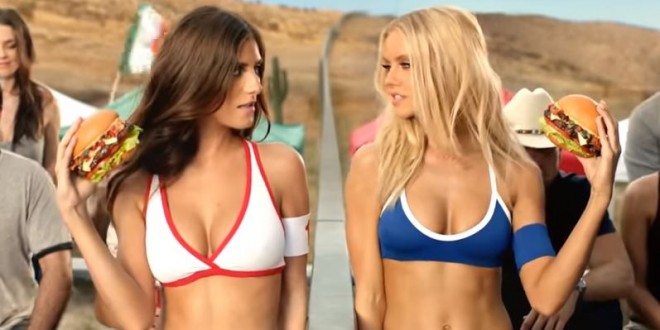 One Million Moms Vs Hardee’s [VIDEO]

Dear Joe, Will Hardee’s ever learn? They are at it again with another disgusting ad. Their current sensual ad follows the pattern set by their last commercial featuring girls in skimpy shorts playing in a volleyball game. These ads are extremely degrading to women and should be pulled off the air immediately. The restaurant’s most recent ad shows scantily clad models licking sauce in provocative poses. 1MM has had enough of CKE’s soft porn ads! We will professionally, but sternly let them know we are not giving up on protecting our families. There is strength in numbers, so be sure to share this with everyone you know! 1MM will remain consistent and dedicated, even with companies that refuse to budge. We simply need EVERYONE’S help in taking action!

In the past, CKE’s reply has been that men are its target market, but women, especially moms, make the majority of meal decisions. Not to mention a majority of the men “targeted” have wives and daughters they love and respect and are offended by an advertising choice that is degrading to women. These fathers also have sons they do not want exposed to CKE’s sexually explicit content, which is considered soft porn by many families. If Hardee’s and Carl’s Jr. continue to advertise in this manner and refuse to remove their recent ad, conservative families will continue to avoid CKE restaurants.

TAKE ACTION: 1MM has attempted to contact CKE Restaurants (Hardee’s and Carl’s Jr.) by email and phone numerous times, but they continue to air these raunchy ads despite public outcry. We are asking you to go one step further and do this the “old-fashioned way” by signing the petition “Stop Hardee’s and Carl’s Jr. Sexually Charged Ads” to express your disgust.

Carl’s Jr. is using the same ad they are bitching about.