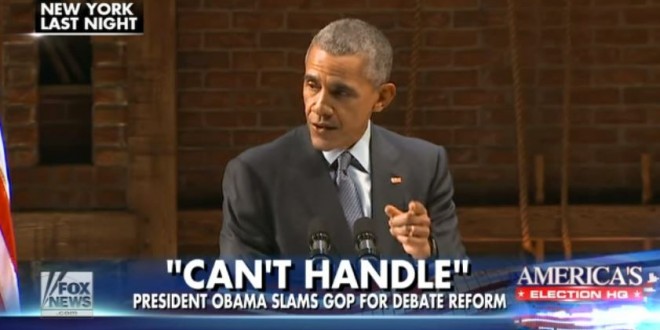 Obama Rips GOP Crybabies: If They Can’t Handle CNBC, How Can They Handle Putin? [VIDEO]

Ah, satisfying. CNN breaks it down:

President Barack Obama tore into Republican presidential candidates Monday night at a Democratic fundraising event in New York, saying their complaints about CNBC’s debate moderation aren’t an encouraging preview for their governing abilities. “Have you noticed that everyone of these candidates say, ‘Obama’s weak. Putin’s kicking sand in his face. When I talk to Putin, he’s going to straighten out,'” Obama said, impersonating a refrain among Republican candidates that he’s allowed Russian President Vladimir Putin too much leeway. “Then it turns out they can’t handle a bunch of CNBC moderators at the debate. Let me tell you, if you can’t handle those guys, then I don’t think the Chinese and the Russians are going to be too worried about you,” Obama said.

Previous Louis Gohmert At Liberty University: Put Eight Gays On An Island And See If Nature Favors Them [VIDEO]
Next MISSISSIPPI: Man Charged With Bombing Walmart For Not Selling The Confederate Flag