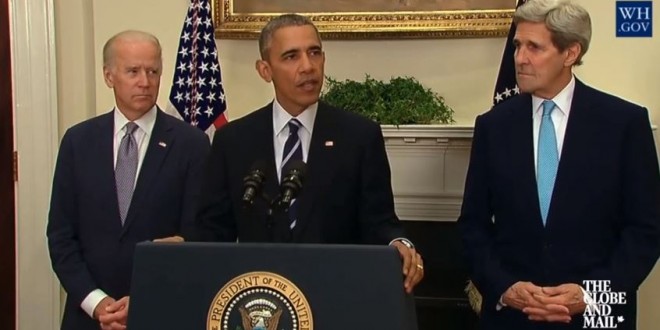 President Obama announced Friday that his administration has rejected the Keystone XL Pipeline project after more than six years of review. “The State Department has decided that the Keystone XL pipeline would not serve the national interest of the United States,” Obama said, appearing at the White House with Secretary of State John Kerry and Vice President Biden. “I agree with that decision.” But even as he rejected it, Obama downplayed the importance of the decision, saying the project had an “over-inflated role in our political discourse,” saying that the project would have been neither a “silver bullet for the economy” nor “the express lane to environmental disaster.” Obama combined his statement on the Keystone rejection with a comment on Friday’s positive jobs report, saying the latter proves that the economy is expanding and that the pipeline would make little difference.

The crackpot press releases are already rolling in. From the Competitive Enterprise Institute:

“President Barack Obama’s decision today to deny the necessary permit for the Keystone XL Pipeline adds to his shameful record of policies to constrict domestic energy production and raise energy prices for American consumers. It comes after six years of foot dragging by his administration designed to delay the pipeline to death and just before the UN climate conference in Paris, where President Obama hopes to cap his anti-affordable energy record by signing a new climate treaty. While the President’s timing is politically clever, his decision is contrary to America’s economic interests and harms our relations with Canada, our closest ally and largest trading partner.”

Previous Ben Carson: I Lied About My West Point Admission
Next Teabagistan Begins The West Point Spin: Ben Carson Was Just Employing A “Loose Use” Of Language