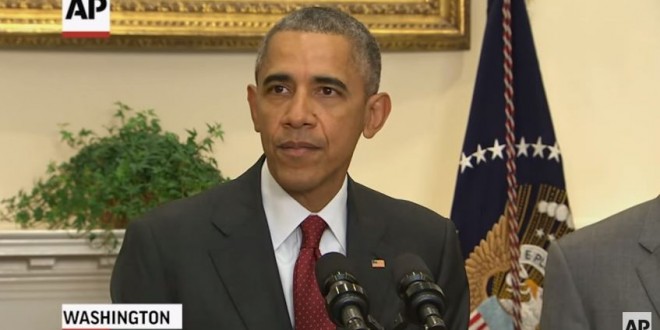 Obama: Enjoy Your Holiday As Usual, There Is No “Specific Credible” Threat Of Terrorism [VIDEO]

President Obama said Wednesday morning there is “no specific and credible intelligence” suggesting Islamic militants in Syria and Iraq plan to strike the U.S. over the Thanksgiving holiday weekend, just minutes after concluding a meeting with his national security team in the Situation Room. Obama’s comments, which were delivered shortly after noon in the Roosevelt Room to a limited group of reporters, come as many politicians are calling on his administration to do more to degrade the capabilities of the Islamic State in the wake of this month’s deadly attacks in Paris.

“And given the shocking images, I know that Americans have been asking each other where — whether it’s safe here, whether it’s safe to fly or gather,” he said, referring to the series of strikes on Nov. 13 in Paris that killed 130 people. “I know that families have discussed their fears about the threat of terrorism around the dinner table, many for the first time since September 11th. And it’s understandable that people worry something similar could happen here. Watching the events in Paris made the threat feel closer to home.”