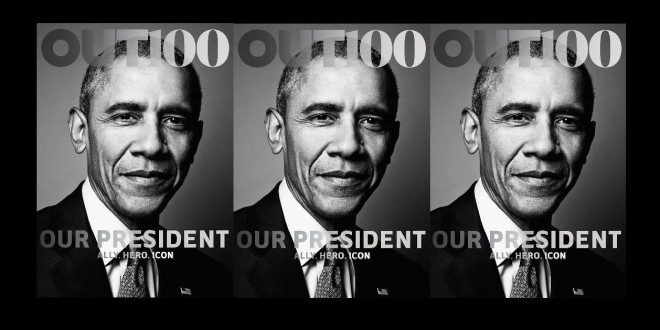 Out Magazine has named President Obama its “Ally Of The Year” in their annual Out 100 issue. They write:

The 44th President of the United States is our Ally of the Year—a president who came to office on a wave of euphoria, appeared to lose momentum halfway through, and has since rallied, helping us secure marriage equality, among other landmark initiatives that are transforming our place in America.

This is the first time a sitting president has been photographed for the cover of an LGBT title, a historic moment in itself, and a statement on how much his administration has done to advance a singularly volatile issue that tarnished the reputations of both President Clinton and President Bush. It might have tarnished this president, too, but for his late-hour conversion in 2012, which set the stage for the extraordinary succession of events that led to this year’s Supreme Court ruling, on June 26, making it unconstitutional to deny same-sex couples the right to wed.

Many things led up to that decision—“decades of our brothers and sisters fighting for recognition and equality” as the president notes—but once his administration decided to join that fight it created what people like to call a “transformative” moment. It helped tip the balance, and it put our elected leader on the right side of justice.

A slideshow of this year’s Out 100 honorees is here.