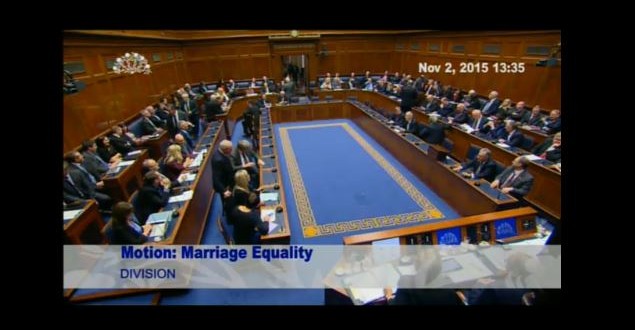 The Northern Ireland Assembly approved same-sex marriage this morning with a very slim majority vote, but the motion failed due to a “petition of concern” presented by the Democratic Unionists Party.

The bill was opposed in an open letter issued by the Irish Catholic Bishops Conference. An excerpt:

We wish to express our particular concern that the motion presented provides no detail whatsoever of the scale or scope of the legislation being proposed. It is also completely silent on the vital issue of respect for individual religious conscience and protections for Churches and other religious groups. Those who vote in favour of this motion have no way of knowing what the full consequences of such a vote will be. What will be the impact for services provided by Churches and other faith groups that offer vital support to marriages and families in all kinds of distress and thereby contribute to the well-being of children and society? The failure of legislators to provide any form of protection for Catholic Church-related adoption agencies that have had to close in recent years is a stark warning to all who value the wide range of social and pastoral services that Churches provide. The motion being debated in the Assembly fails completely to protect the future of these services and their right to operate within the religious ethos from which they were founded and continue to provide a valued service to communities.