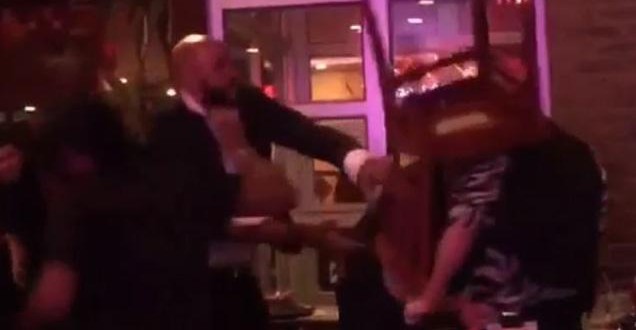 The gay man charged with clubbing a Chelsea gay couple over the head with a restaurant chair has sued the couple for assault and defamation. Also being sued for defamation are witnesses who provided video and statements to the police. Courthouse News Service reports:

An HIV counselor’s night out in New York City went off the rails when he was labeled a homophobic racist for wielding a chair to fend off a gay couple attacking him, he claims in court. The May 5, 2015, altercation at a Dallas BBQ in Chelsea hit major news outlets across the globe, and had politicians and civil rights groups rushing to judgment. “Cops hunt thug who beat gay couple with a chair,” proclaimed the New York Daily News. New York City Councilman Corey Johnson meanwhile renounced “the senseless act of anti-LGBT hate violence that was perpetrated last night at a restaurant in my district.” Bayna-Lehkiem El-Amin, the Bronx man who was the target of these headlines, contends in a Nov. 19 lawsuit that there was only one problem: he was actually the victim.

El-Amin says he “never suspected that he would wake up to a viral news story labeling him a homophobic hate criminal, that he would be entirely isolated, that he would receive so many threats that he would have to go into hiding, or that he would be completely ostracized from society.” Though El-Amin was charged with assault and attempted assault, tabloids noted that he would not face hate-crime charges because he too is gay. In his complaint, El-Amin insists that his “only crime was to be a man of color wrongly accused by his attacker, a privileged white man, but if convicted plaintiff faces the prospect of spending the rest of his natural life in prison.” El-Amin seeks damages for assault and battery against Snipes and York-Adams, negligence against Dallas BBQ, and defamation against all defendants, including Sharef, Friedlander and Meyers.