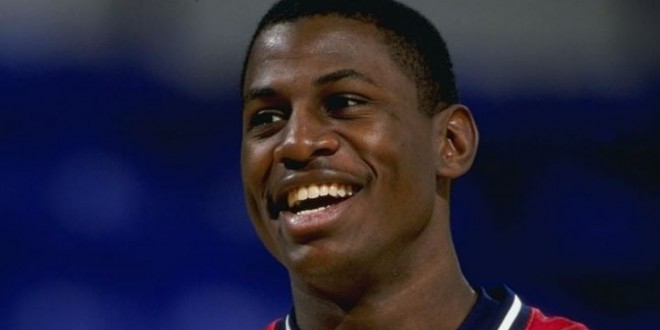 Michael Wright, a pro basketball player once drafted by the New York Knicks, was found bludgeoned to death in his SUV on Tuesday. NYPD detectives believe Wright may have been murdered by a man that he met on Grindr. The New York Daily News reports:

Wright was found dead from a head wound inside his Lexus SUV on E. 16th St. in Midwood about 11 a.m. Tuesday, officials said. His body was covered in black garbage bags. Autopsy results had not been released Wednesday evening, but police are investigating his death as a homicide, law enforcement sources said. Wright’s grieving family was left bewildered. “We are in disbelief,” Wright’s cousin Randolph Berry, 40, of Chicago told the News. “They’re telling us it’s foul play. His mom is on her way to New York now.” Berry said he didn’t know why someone would hurt his cousin, who on the court was an imposing 6-foot-8 power forward. “He’s a gentle giant,” Berry said. “He was a good person.”

Detectives are investigating the possibility that he was killed by someone he met on a gay dating app, Grinder, police sources said. Berry said he didn’t know if his cousin was gay. “We don’t know anything about his personal life.” Berry said. “All we know is that he did damage overseas. When he played ball, he destroyed everyone in front of him.” Wright was a forward for the Arizona Wildcats between 1998 and 2000. He was drafted by the Knicks in 2001, but never made it onto the roster, colleagues said. He ended up joining the overseas basketball circuit and played in Poland, Turkey and France, family members said. “He left his French team in February and was planning to go back to Europe and play,” Berry said. “He wasn’t planning on retiring.”

Wright was a standout power forward for the Wildcats from 1998-99 to 2000-01, leaving as a junior to become a second-round draft pick of the New York Knicks. He then began his overseas career in Poland and found extended success in Turkey, where he became a Turkish citizen under the name Ali Karadeniz. “As soon as you think of his name, you think of him as a hard-working and dedicated, conscientious about the classroom, community stuff or basketball – it didn’t make any difference,” former UA coach Lute Olson said. “He was a real workaholic as a freshman.