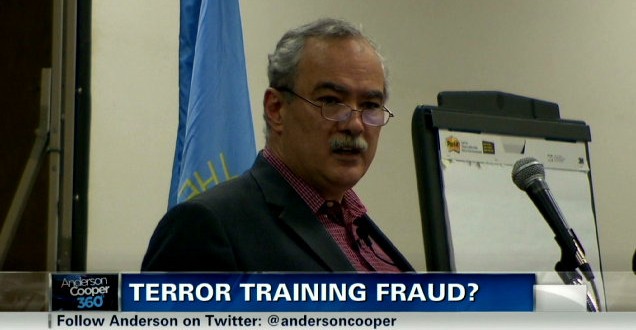 Walid Shoebat, father of genocide advocate Ted Shoebat, was paid $6000 to lecture New Jersey cops about terrorism. This despite the fact that the elder Shoebat has been found to have invented virtually every aspect of his supposed history as a Palestinian terrorist. From the Asbury Park Press:

A purported “expert witness” on Islam known for his anti-Muslim and anti-gay views, and whose claims that he is an ex-Palestinian terrorist have been discredited by news media and other groups, was paid thousands of dollars in taxpayer money to address police at a seminar in Ocean County last week on counter-terrorism. The appearance Nov. 2 by Walid Shoebat, a Palestinian-American who bills himself as a former Muslim terrorist turned Christian, was attended by more than 60 law enforcement officers from throughout the Jersey Shore and sponsored by the Ocean County Police Academy, the Asbury Park Press has learned.

Shoebat was featured in the “Know Your Enemy” seminar even after the state Attorney General’s Office voiced concern and a local Muslim group asked the county to disassociate itself from “perhaps the nation’s most notorious Islamophobe.” Shoebat, who did not reply to an emailed request for comment, gained notoriety after the 9/11 attacks, offering himself as a terrorism expert and appearing on CNN and BBC news broadcasts. He represents on his website that he became a radicalized Muslim as a teenager in Chicago in the late 1970s; later joined the Palestinian Liberation Organization; was jailed for three weeks in Jerusalem because of his nefarious activities; and even participated in a bomb attack on a bank — all before converting to Christianity in 1994 and becoming a crusader against terrorism. He asserts that all Islamic organizations in America are enemies of the U.S.

In the above-linked story you’ll find an exhaustive breakdown on Walid Shoebat’s fictitious backstory as well as his tweet which claims that Hillary Clinton caused Benghazi.