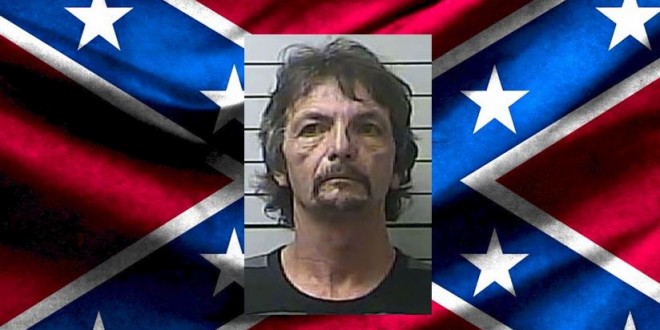 MISSISSIPPI: Man Charged With Bombing Walmart For Not Selling The Confederate Flag

A 61 year-old Mississippi patriot has been charged with bombing a local Walmart because the chain no longer sells the Confederate flag. USA Today reports:

Tupelo Police Chief Bart Aguirre said a vehicle pulled up to an entrance of the Walmart in North Gloster around 1:30 a.m. CT. “A white male got out, lit the package and threw it in the vestibule,” said Aguirre. “There was an employee on break, and the suspect told him, ‘You better run.’ “The employee did run and was away from harm when the package went off. It wasn’t a large explosion. It didn’t cause a lot of damage to the store.” No one was injured in the incident. The remnants of the homemade explosive device have been sent to the crime lab.

Last Wednesday, Leonard posted threats on the Daily Journal Facebook page. “Journal corporate, you are on final warning,” he wrote Oct. 28. “You are part of the problem. As a result of this, y’all are going down, along with Walmart, WTVA, Reeds department store, and all the rest of the anti-American crooks. I’m not kidding. No messing around anymore!” Leonard was taken into custody after being stopped for a traffic violation. During the stop police quickly determined he was a suspect in the Walmart bombing.

Leonard faces a possible life sentence for placing an explosive device in an occupied building.