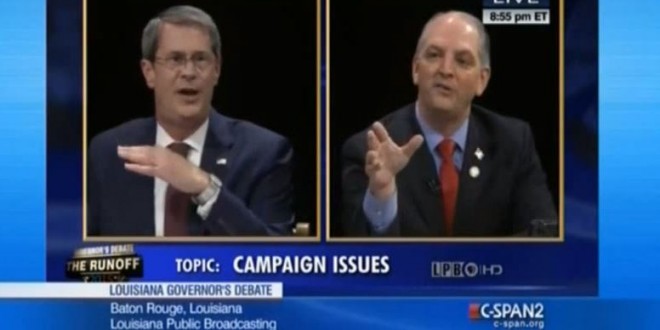 A debate between Louisiana gubernatorial candidates John Bel Edwards (D) and U.S. Sen. David Vitter (R-LA) took a nasty turn Tuesday night when the two men used a question about campaign trackers to lob personal attacks at each other. “He’s actually sending private investigators to spy on the sheriff,” Edwards said. “There’s enough scandal and embarrassment here to last a lifetime. Louisiana doesn’t need any more of that.” Vitter then accused Edwards of acting “holier than thou” while running tough negative ads, including one that invoked Vitter’s connection to the so-called “D.C. Madam” prostitution scandal.

“With re­spect to the neg­at­ive ad, if it’s a low blow it’s only be­cause that’s where you live, Sen­at­or,” Ed­wards said. “It’s 100 per­cent truth­ful. The fact of the mat­ter isyou didn’t say it was un­true. You want me to take it down be­cause you don’t like it. I un­der­stand that you don’t like it. It hits you where you live.” Vitter charged that Edwards, a former Army Ranger, wasn’t “living by the honor code.” “I am not looking at any video footage from you. I haven’t hired a private investigator to go after you … you’re a liar and you’re a cheater and you’re a stealer and I don’t tolerate that,” Edwards shot back.

Previous NOM: Gays Control The Media So Send Us Money
Next Tony Perkins Has The Equality Act Sadz