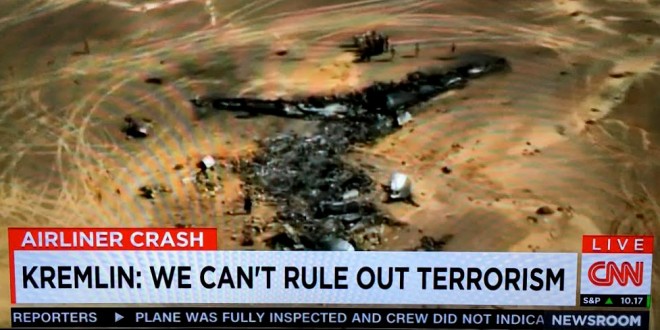 Russian officials this morning reversed themselves on the possible cause of this weekend’s jetliner crash, saying they can no longer rule out terrorism. The reversal comes amid renewed speculation that the plane was brought down by a bomb. According to the airline, it appears that the plane did not break apart in mid-flight but was destroyed by an “external influence.” CNN reports:

Kogalymavia Flight 9268 broke into pieces before it hit the ground in a remote area of Egypt’s restive Sinai Peninsula on Saturday, killing all 224 people on board. “We exclude technical problems and reject human error,” Alexander Smirnov, a Kogalymavia airline official, said at a Moscow news conference as he discussed possible causes of the crash. He added that the crew did not issue any warnings or communications during the final moments, indicating that the flight crew must have been disabled and not able to radio out. Air traffic controllers apparently didn’t receive any distress calls from the pilots. “There was nothing abnormal before the plane crash,” Egyptian Civil Aviation Minister Hossam Kamel said Saturday. “It suddenly disappeared from the radar.”

More from the Telegraph:

Flight 7K9268 lurched up and down several times in the final moments before it lost contact with the ground, according to data from the Flight Radar 24 tracking site. The Airbus 321 climbed nearly 3,000 feet in three seconds before falling another 3,000 feet a few seconds later, the altitude data shows. It repeated the abrupt rise and fall a second time before it was lost to radar. The records from the Sweden-based Flight Radar 24 also show the aircraft rapidly losing speed in its last minute. This data is usually very reliable, but can sometimes be affected by an erroneous message. Alexander Smirnov, a top official at Metrojet, says its plane dropped 300 kph (186 mph) in speed and 1.5 kilometers (about 5,000 feet) in altitude one minute before it crashed into Egypt’s Sinai Peninsula. The flight was at a cruising speed of just over 407 knots (468 miles per hour) at the beginning of the data set. Thirty seconds later the speed had fallen to just 62 knots (70 miles per hour) – far too slow for a plane that size to remain airborne.